The deadline has now gone for objections or comments on whether or not the petrol filling station at Garston Way (the bit where St Mary's Road starts going into Garston village) should be able to sell alcohol late at night and in the early hours of the morning.

We don't know yet when the licensing committee is likely to make a decision on this but I will post updates when I have more news.

Meanwhile, thanks to the people who signed our petition on the issue. The licensing section will by now know about the strength of local feeling.
Posted by Paula Keaveney at 12:17 No comments:

Cobblestone corner is a little cul de sac off Ivy Avenue in Garston.  Ivy Avenue itself is off Garston Old Road.

A few years ago Cobblestone corner was basically some student accommodation buildings round a yard.

Since then it's changed with family houses along one side and empty properties along the other.

A developer has just sent in  plan to create "supported living" homes in part of the "corner".

The idea is that these would be for people with disabilities.

The full details of the plan aren't published yet, but when they are you will be able to see them at this link.

When I have more information on this I will blog again, but if you are a local resident who might want to comment it's worth you checking the link over the next couple of weeks so you have the detail you need.
Posted by Paula Keaveney at 13:55 No comments:

Back in May, as a result I suspect of some of the media coverage, the people from LINK came up to Liverpool to discuss things but also to have a look around the various areas which were local cash deserts. There were quite a few of these and many were in areas of deprivation, making the problem not just annoying but a real tax on poverty.

Anyway, the good news is that another tiny step foward is being taken in that the visit has now been written up and is on the agenda for a Council committee next week (Wednesday's finance committee).

So hopefully this will mean the problem gets highlighted again and some action gets taken.

Its not a problem the Council can solve on its own (although it does own buildings that in some cases would be great ATM locations) but the Council can help create situations which make it more likely that fee free cash machines will be put in.

One of the cash machines in Cressington that charges takes £1 80 for each withdrawal.  If you think about someone taking cash once a week that mounts up considerably.  And even if you only pay the price once, that's £1 80 that you could spend on something like bread and milk, or orange juice, or cereal.

So what on the face of it sounds like a small issue can actually be a big problem if you are cash poor and at a time when many people are strugging surely this is a problem we ought to crack.
Posted by Paula Keaveney at 11:37 No comments:

Getting news about the local area

I post regularly with news about Garston, Cressington, Grassendale, Allerton, Mossley Hill and the wider area.

But I send out e mail bulletins too.

If you want to subscribe to them, you can do that using this link.
Posted by Paula Keaveney at 11:12 No comments:

I had an e mail the other day from someone moving to Garston . He told me he had reserved a  house on Harold Newgass Drive.

It was great to have evidence that the day when we honour (again) this particular Garston hero is nearer.

I've blogged before about the work to do more to recognise Lt Newgass and about his bravery in Garston Under the Bridge during the war.

We managed to persuade the Council to recommend a new street being named after him.  And when the extension to Kings Lynn Drive is finished, there it will be - Harold Newgass Drive.

There's a while to go yet.  Some of the building is at a very early stage.  But it was great to have someone mention the street that way.

When I know about ceremonies etc, I will make sure I blog about it here as I know there is loads of interest in the history of the area.
Posted by Paula Keaveney at 11:09 No comments:

Money for your group?

There's money on offer for environmental projects in Merseyside.  It's from a Waste Disposal Authority fund.  You need to be doing something that reduces waste in some way or other.

The next bit of this fund has just opened for applications with a closing date at the end of August.

After that there's another one specifically aimed at schools.

Anyway, if you have a group that does environmental stuff it's worth a look.

You can find the link at this web address:


Posted by Paula Keaveney at 15:48 No comments:

Liverpool's elected mayor - were we conned?

My colleague, and now leader of the Lib Dem group on the City Council, Cllr Richard Kemp, is calling on the Mayor of Liverpool to "come clean" about what was or wasn't promised around the whole issue of whether or not Liverpool should have an elected mayor.

Richard will be raising this at a City Council meeting next week.

I am pasting below some info about what we think on the topic and what we are saying.


"Councillor Richard Kemp, Leader of the Lib Dem Group on Liverpool City Council is demanding that the Elected Mayor, Joe Anderson, publish the details of the deal he made with the Government when he decided to deny electors a referendum on whether the City should have an elected mayor.


Back in February 2012 the then Council Leader, Cllr Anderson announced that the City would get a £130m boost to its economy if it moved to an elected mayor. But, now it’s clear that other Cities who didn’t go for the mayoral model have received similar amounts of money, in Manchester’s case considerably more money for their citizens.

‘The Council sold the citizens of Liverpool’s right to vote for £130 million and now it seems we would have got more if we hadn’t got a mayor thrust on us’. Said Councillor Richard Kemp.

‘The whole saga has been cloaked in secrecy’. The Mayor has already failed in his pledge made in July 2010 to be open in all his dealings and publish the work which he undertakes with the City Region Cabinet’.

‘I’m now calling for an end to this whole sorry mess and challenging the Mayor to show the residents and his fellow councillors that he’s got nothing to hide’. "


Posted by Paula Keaveney at 12:21 No comments:

The language we use

I am writing what I hope will be a series of short articles on various topics around politics and local democracy.

I've managed to get one of them published on one of the Post and Echo blogs.

You can find a link to it here.http://blogs.liverpooldailypost.co.uk/dalestreetblues/2012/07/paula-keaveney-the-language-po.html
Posted by Paula Keaveney at 12:15 No comments:

The CAB in Garston village is temporarily closed (the building that is not the service) for some work on the building.  This CAB is actually merged with the one in Toxteth so while the Garston building is closed you can still get face to face advice from the Toxteth building.  Obviously the phone service and on line stuff is not affected.  The change starts today (2 July) and runs to early September.  There are lots of notices up in the windows of the Garston building with the various times of the advice sessions.
Posted by Paula Keaveney at 11:00 No comments: 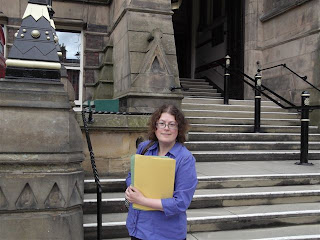 The hearing into the choice of waste sites across Merseyside (including the Stalbridge one) is now finished.  I spoke on the last day of actual hearings and the Inspector then had a couple of days to visit some of the sites.

I was the only politician, from any party, to turn up and say anything about the Garston proposal.

We now have a bit of a wait.  The Inspectors report should be out around October.  I will blog again on this when I have any updates or when there is more news available.


This, not particularly flattering, pictures is me outside St Helens Town Hall just before the days session started.  I am publishing this as bizarrely a senior Labour Councillor earlier denied the very existence of the hearing!
Posted by Paula Keaveney at 10:55 No comments: