I've recently come across the story of Lt Newgass, someone who saved a lot of lives by defusing a mine in Garston during the war.

A local man is keen to see Lt Newgass' bravery commemorated someone - perhaps with a plaque at the library or on another local landmark.

I've put my name to a motion about this for the next Liverpool City Council meeting (along with colleagues Tina Gould, Lynnie Williams and Richard Oglethorpe). The local man , Stuart Daniels, who told us about this is hopefully going to take part in an interview on Radio Merseyside to give more deetails.

The story, I am told,  is this.  Back in November 1940 a parachute mine landed on Garston gasworks. It didn't go off straight away but people feared it might detonate at any time so 6,000 people who lived nearby had to be evacuated.  It wasn't even clear exactly where the mine had lodged, so pumps and fans were used.  It was when the air inside the tank wasn't considered explosive that some could actually go in.

Lt Newgass, a veteran of the previous war, was a member of the bomb disposal unit.  Using oxygen apparatus, he went into the tank.  He spent time over two days defusing the mine.  It was particularly difficult work as the oxygen tended only to last for thirty minutes at a time and the fuse was hard to reach so the mine had to be turned.  Imagine the pressure of worrying about the oxygen and the bomb while having to do quite a bit of heavy lifting!

If the mine had gone off, not jus the gas works but the neighbouring properties would have been completely destroyed.  Lt Newgass was awarded the George Cross for his bravery.  Other brave men also worked to save lives at the Gas works that night and any marking of Lt Newgass' heroism would also be marking theirs.

I do hope some way can be found of recognising this further.
Posted by Paula Keaveney at 14:19 No comments:

A planning application has come in to change one of the shops on Greenhill Road to a "hot food take away".

By the looks of things on the City Council website, letters haven't gone to anyone living nearby yet.

A bit more information is in the section called related documents.

Last time there was a planning application for a takeaway in this area (although not at this particular site) there was quite a lot of worry about litter and traffic.  The takeaway got permission but there were some conditions, including a litter bin. Richard and I are interested to hear people's views on this so please feel free to e mail us at paula.keaveney@liverpool.gov.uk or richard.oglethorpe@liverpool.gov.uk

Posted by Paula Keaveney at 21:58 No comments:

The conference directory, with all the fringe meetings etc in it, doesn't seem to have been published for party conference yet but looking through the list of what's planned by the Social Liberal Forum, or what the Forum is involved in, it looks like there are going to be some great debates.

The fringe on phone hacking on the Sunday is not only topical but has some great speakers - Alan Rusbridger of the Guardian and Hugh Grant are just two of them.

It's good also to see that Will Hutton is down to speak at another meeting.  He was so informative and interesting (also challenging and rather scary) at the SLF conference.  I know that people there wanted to hear more from him so its great we've managed to sort that.

Posted by Paula Keaveney at 20:42 No comments:

Great news today that the A level passes for young people at Liverpool schools mean that the City's results are above the national average for the first time.

I don't really like league tables, but given they seem to exist everywhere its good to see we are moving up this one!

Posted by Paula Keaveney at 20:23 No comments:

A group of young people will be getting together next week to work on turning a piece of ground behind Garston Park Church (formerly Island Road Church) into a community garden .  They've got assistance from B and Q and have already done some work to prepare the ground.

Brendan, a local youth worker on the Grassendale detatched youth project, says that work should be going on from Tuesday to Friday next week (23rd to 26th) from 12 till 5 every day.  And if you want to pop along and lend a hand, or show some support, you'd be very welcome (even more welcome if you bring along a garden fork or spade to get stuck in)

I'll try to post more information to update on the project

Posted by Paula Keaveney at 20:15 No comments:

This is the link to the story.

(There are several pages to it)
Posted by Paula Keaveney at 14:45 No comments: 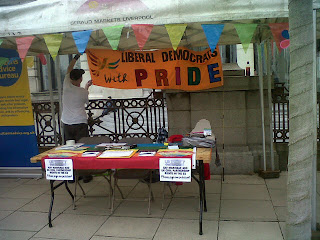 Liverpool Lib Dems took part in Liverpool Pride on Saturday.  This is Paul setting up the stall shortly before it all started.
Posted by Paula Keaveney at 10:36 No comments: